When you move to a new city, there is nothing more exciting that when that city starts becoming your “own”, when you find those places that will be “your places” and the city map begin to tweak in your head until it’s not a real representation of the space but more like an emotional one. Read more

Last month’s Usk-L meeting took place in Spitalfields market, in Shoreditch. Maybe due to the nice weather or because it was a lot easier to get there than to Hendon, the attendance was way higher this time. Para la última quedada de London Urban Sketchers nos fuimos a dibujar al mercado de Spitalfields, en Shoreditch. Read more 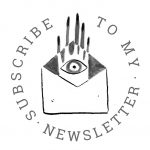